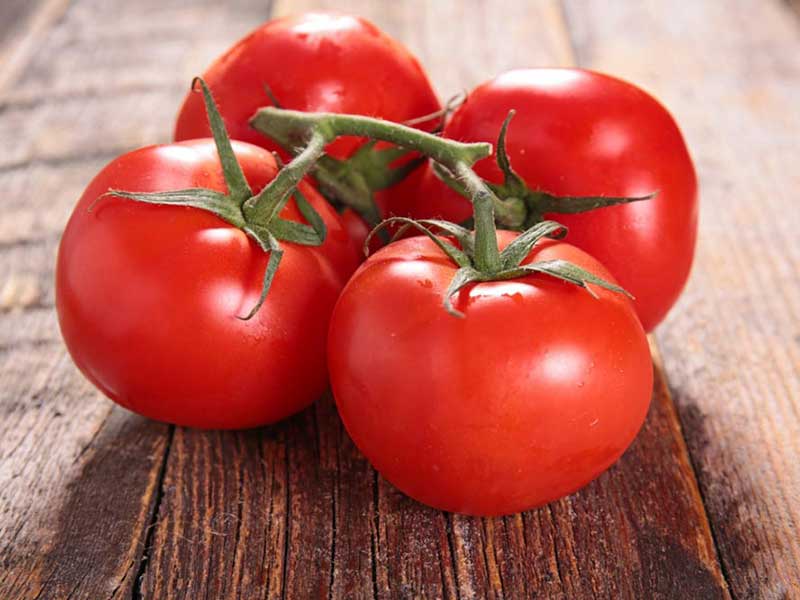 The purpose of this article is to teach you how to grow tomatoes in a greenhouse. This article describes how to plant, pruning, fertilizing, harvesting and everything related to growing greenhouse tomatoes. Chapter One

Tomato is a multi-year-old scientific plant, but it is usually planted annually. Wild tears of the genus lycopericone have more than 8 species. The natural distribution and distribution of this plant is limited to the Andes mountains. The location or localization of this plant is not clear. There is a lot of evidence indicating the Mexico region. Tomato is usually perennial in native or tropical regions, but in temperate regions it is killed annually with central leaves and scientific stems and flower characteristics are as follows:
Tomato flowers appear on nafeh-like woman with varying degrees of complexity. The base of flowers on the stem appears three doors in leaf nodes, flowering is circled and one or two flowers are opened per day. Flowering starts in a certain vase before it is absorbed in the older mudslide. For this reason, flowers and flower buds of all stages of opening, usually in a branch, are unisex flowers and material is covered by a bold tube created by flags. Pollen grains are poured into the central cavity by the side holes and next to the flags, since the mud is dangling, pollen grains fall into the mouth of the pipe where the stigma is located by gravity. Therefore, self-pollination is done spontaneously.

In some other conditions, pollination is possible in tomatoes:

A self-incompatible species with a genetic reason

B In some hot days that are more than usual for growth, the khahaneh may grow too much and be ready to accept foreign pollen grains.

In the cultivars, the late bud continues to grow and after the production of all three leaves, an inflorescent flower is produced. Greenhouse cultivars are specific to this type. However, it may also be used in farms.

In semi-certain cultivars, one inflorescessum is produced for all three leaves and finally in the end bud, flower buds are produced. In Iran, uncertain growth is commonly used for planting in farms and greenhouses.

Cultivation of tomatoes in greenhouse:

Cultivation in greenhouse can be directly seeded or transplanted. Seed planting time is done when the ambient temperature is higher than 10 degrees Celsius. On average, there are about 300 tomato seeds per gram, generally direct seed planting in greenhouse is not recommended, so first, seed coffers should be created and transferred to the main sites after transplantation. It is usually necessary for a heckle of about 40 square meters of treasury, the treasury should be ready in the corner of the greenhouse. It is necessary to take all necessary care of the treasury. When the transplant height reaches about 30 20 centimeters, the best transfer time is. It is better to icy the treasury before transferring 24 12 hours ago.

Taking care of the bushes cultivated in the greenhouse:

The best temperature for proper growth is 24°24°F at night and 16°17°S at night. If tomato enters the germ growth period above 27°C, the coloring of the fruits is not well done and above 35°C and fertilization is not possible if the temperature in 10 5 days before the opening of the flowers is more than 38 °C. In terms of light requirements, tomatoes are neutralized. It means that light does not affect the flowering of that plant, it requires a lot of water, usually depending on the type of soil 7-1 days, it needs irrigation once.

In order to produce 100 kg of fruit, it is necessary to give approximately 300 250 units of zet, 250,150 P and 350 250 units of potash to the plants. Phosphate fertilizers are given to the ground in three stages in one step and you are usually given the first part of you, which is half of your baby, 20 days before planting and the remaining quarter at flowering time and the remaining quarter at the beginning of fruit growth with irrigation water.

In greenhouse cultivation, tomato plants are usually pruned after transplantation and vertical conductivity on the system is allowed to grow. After reaching the height of the plant to 75 cm to 1 m, the end bud is cut off. After cutting off the end buds, the lateral branches grow and after the production of clusters in each sub-branch, this branch is also beheaded from the end. As a result, the possibility of receiving light into the bushes will increase, this type of pruning is known as single branch pruning.

There is another method in pruning called bifurcation pruning. In cultivars with strong growth, usually after 4 leaves, the bud is cut off from the top of the fourth leaf and after discontinuation, the growth is allowed to be two sub-branches. These sub-branches are directed on two separate prices on the sides and after reaching the height of 75 cm, one branch pruning is performed.

The method of recognizing tomato ripening is an important factor in fruit harvesting. If the material that surrounds the seed is jelly and can be separated from the seed with a knife edge then the fruit has arrived.

A) Unripe fruit: When the seeds are fully grown and jelly-like materials have been created around the seed

B) Ripe green fruit: A fully grown fruit that a brown ring is made at the junction of the stem after the flower bowl.

D) Rigid ripe: The fruit is almost generally red or facial, but the meat of the fruit is stiff.

(a) Ripe: The fruit is completely colored and soft.