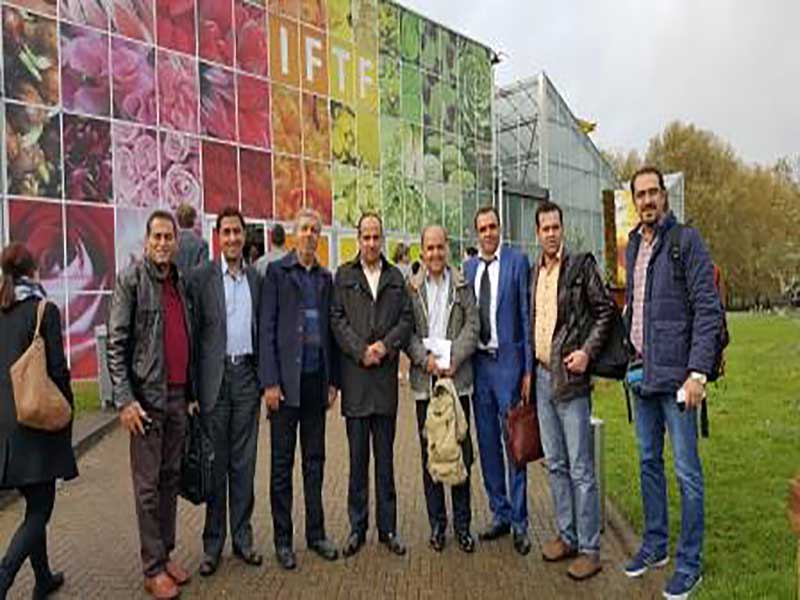 The trip to the Netherlands was provided at personal expense and with the planning and coordination of the Central Province Chamber of Commerce, the Embassy of the Islamic Republic of Iran in the Netherlands and the National Research Institute of Flowers and Ornamental Plants. Following is the report of the visit of the Flower and Plant Trade Board of Mahallat city to the exhibition and greenhouses of the Netherlands.

A trade delegation of flower and plant growers and experts from Mahallat city was sent to the Netherlands. This trip was provided at personal expense and with the planning and coordination of the Central Province Chamber of Commerce, the Embassy of the Islamic Republic of Iran in the Netherlands and the National Research Institute of Flowers and Ornamental Plants. This group consisted of officials of Markazi Province Chamber of Commerce, experts, producers and exporters of flowers and ornamental plants of Mahallat and the governor of Mahallat city. 16.5 million people have a population and a per capita income of $ 47,000.In 2014, the country's exports were $ 574 billion. This country is the most experienced and largest producer of flowers and ornamental plants in the world, which plays an important role in the prosperity and transfer of new findings in this industry by holding exhibitions of flowers and ornamental plants every year. The most important of these exhibitions are Flora Holland and IFTF.
The city of Amsterdam, the capital of the Netherlands, has access to Lake elsselmeer and the North Sea Shipping Canal and the high seas. To be.
During the planning, the following centers were visited:

In this regard, during the attendance at the Flora Exhibition in the Netherlands, large coats such as Antora and Scrooge, etc. were visited. In this exhibition, about 700 booths from different countries such as Ecuador, China, Kenya, South Korea, Colombia, Ethiopia, etc. were present. In addition to a great variety of cut flowers, especially roses, lilies, orchids, etc. in the section of houseplants, carnivorous plants, terrarium plants, cacti, grasses, onion bulbs, etc., there is also a lot of innovation and diversity. There was a high.
The IFTF exhibition was attended by 125 different countries to present and visit the exhibition booths, and more than 25,000 visitors registered before the exhibition.

At the IFTF exhibition, which was held with the strong presence of many large companies and breeds and producers, good negotiations were held for cooperation, and it was decided that the experts of these companies would visit the greenhouses and facilities of this city and allow export and import. .

In the Alsair Flower Exchange market, which begins in the early hours of the day before sunrise, flowers are graded and tested by experts before entering the auction area in a very unique process, and their durability and other characteristics are thoroughly examined. And then exposed to display and sale. Buyers who are provided with a special code and credit card to compete to buy the flowers they need to compete.
After the auction hours are over, the shopping list of each buyer is completed by market agents in an orderly and interesting way and transferred by special trucks carrying flowers. In the field of greenhouses in the Netherlands, breeding greenhouses and production greenhouses related to roses, carnations, anthuriums, lilies, gerberas, cactus, seasonal flowers and seedlings, etc. were visited and very good negotiations were held for the transfer. New technology for watering potted flowers and also transferring new cultivars of rose and gerbera to Iran.

Some of the most important travel plans and achievements are:

Visit Cactus Production Company, UBINK Netherlands,
Visit Gerbera Production Company (Tranigra) and check the available Gerbera cultivars
Visit Rose Olij Production Company with nearly one hundred and forty thousand square meters of modern greenhouse
Visit Lex company, producer and breeder of roses from DUMNEN ORANGE group
Visit the Alzheimer's Flower Market (the world's largest flower market) and the market auction system, market laboratory
Meeting with Werman Company, the world's largest exporter with the latest collection of flowers
Visit Schneider's seedling production greenhouse in Rotterdam, the Netherlands
Holding a joint meeting with the Dutch FME organization with 2500 subsidiaries and a turnover of sixty billion euros per year
Holding a meeting with the officials of the Dutch flower market and consulting on the direct export of local flowers to the Netherlands
Visit and negotiate for the transfer and purchase of greenhouse mobile table technology from KG SYSTEM
Negotiation on the production under license of rose bases in Iran with the participation of the Dutch company Razan Tantao and coordination for the expert visit of this company to Mahallat city
Carrying out preliminary negotiations for the propagation and import of Giminocalcium cacti in different colors from South Korea
Negotiation for direct purchase of plants in the region, cyclamen propagation bases, Bint Al-Qansul without intermediaries
Select new rose varieties and negotiate for the direct purchase of new and suitable bases in the city of Mahallat
Visiting breed greenhouses and producing colored trumpets and conducting necessary studies and consulting with the Dutch side to enter cultivars suitable for Iran's climatic conditions (neighborhoods) and removing cultivars that are not suitable for Iran's climate, as well as breeding agreements
Visit Anthura production greenhouses and obtain the necessary technical information for Anthurium production in Mahallat city
Hyplast Company obtains very valuable technical information about PVC nylon locks and greenhouse films that are considered a problem in Iran.
Negotiation for the introduction of propagating bases of pineapple ornamental plants from Exotic Plant.
Attend the Wellcuk Horticulture Center in Alsmeer and provide rare inputs including plant hormones
Undoubtedly, the presence of flower and plant producers and experts in international exhibitions will have a very positive impact on the development of this industry in the country. In 2004, the strong presence of Pakdasht officials and flower growers led to many positive changes in the flower industry of Pakdasht city.