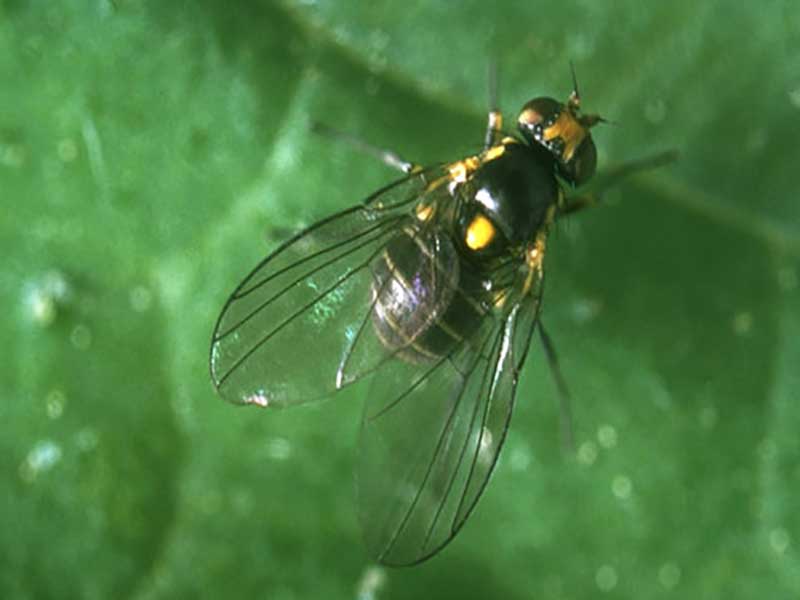 Green leaf minnow fly Liriomyza sativae Blanchard is one of the important greenhouse fantasy pests in Iran. In this study, the resistance of the seven common cultivars of Khyrglkhaneh E Storm, Afzal, Janet, Sting, Radiant, Kaspin and Nasim to green leaf minnows fly using biological indices in greenhouse with temperatures of 27 ± 2 degrees Centigrade and moisture...

Green leaf minnow fly Liriomyza sativae Blanchard is one of the most important greenhouse fantasy pests in Iran. In this study, the resistance of seven common cultivars of Storm, Afzal, Janet, Sting, Radiant, Kaspin and Nasim to green leaf minnows fly using a biological characteristic in greenhouse with Temperatures of 27 ± 2°C and relative humidity of 60 ± 5% and light period of 16:8 (darkness: light) were investigated in a completely randomized design. Based on the obtained results, there was a significant difference between cultivars in terms of some biological indices of minnow fly such as larvae duration, larvae mortality percentage and pupae weight.Janet and Storm cultivars had the highest larvae course and larvae mortality rate with an average of 78.6 and 69.6 days and 29.19%, respectively. In terms of lewd weight, Janet cultigraphy with an average of 7.324 mcg had the lowest weight. Using the classter analysis method, the tested cultivars were reduced to three groups of high resistance, respectively. Storm, Janet and Afzal cultivars were classified in the first group, radiant and nasim in the second group and sting and caspin in the third group. According to the results of this study, cultivars with higher resistance to dinosaur flies such as Storm, Janet and Afzal can be used in integrated management of green leafy fly in greenhouses.

Liriomyza sativae is one of the most important pests of minaret in Greenhouses of Iran. This pest is damaged by transmission of pathogens, destruction of young transplants, decreased yield, reduction of photosynthesis, and leaf loss. In cucumber greenhouses, minnows significantly reduce yield and delay in ripening of cucumber fruits.

In case of uncontrolled leaf minnow fly, the minced bushes are generally dry and destroyed. Greenhouse owners spray to control this pest many times, which causes the loss of natural enemies, resistance in the pest population and its resupiration. The use of resistant cultivars is considered as one of the effective methods in integrated management of this pest and is the most useful method of combat in IPM and forms its core. Minus flies in each plant have better growth and development on some cultivars than others. Chemical content of a plant, its nutritional value and dispersion and density of cracks are effective on the absorption of minus flies. The leaf type of host plant in terms of physical, chemical and nutritional properties is an important factor for female insects in accepting or rejecting a plant.Zahiri et al. studies on anti-biosynthesis resistance of six bean-to-fly minnows showed that there was a significant difference between the mortality and lauri period of minnow flies in the tested cultivars. Schuster and Harbaugh studies on the relative resistance of Davoodi cultivars to minnow flies on 28th of Davidi were significantly different. Web and Smith researches showed that there is a significant difference between 19 dilutes of Davidi compared to minnows fly. In this study, larvae showed higher mortality in 14th of larvae than Eisberg cultior. Studies by allaneb and colleagues showed that the anthybus and anthyzenosis of the minus fly were due to the oozing of tomato leaf thycoms. Studies of IAP and sandrodine showed that phenolic compounds in host plants are effective in their resistance to minnow flies. The results of Poe and Greene's research showed that different Davidi cultivars play a decisive role in population density of insects (tripps, aphids and ticks).

Considering the importance of cultivar resistance in integrated pest management, in this study, anti-biosynthetic resistance of some common greenhouse flue cultivars to green leaf minnow flies was investigated.

In 2007, a number of greenhouses contaminated with pests were visited in different regions of Isfahan and a large number of pupae were collected separately from each greenhouse. The pupaees were transferred to the entomological laboratory and kept in breeding containers until the emergence of adult insects. The adult flies appeared using reliable and available sources and sent to The National Plant Research Institute for final diagnosis. After final confirmation of the species, green magic which was different from the experimental cultivars in this study was used to breed and form the population according to Petit and Witlisbach method.  In 2008, for experiments, stingy cultivars, Radiant and Kaspin (Rokzwan Company of the Netherlands), Nasim, Storm and Janet (De Reuter Sids Company of the Netherlands) and Afzal (Diamond Sid Company of America) which are commonly killed by greenhouse owners in the region were used. In order to remove the feeding effect from the previous host on the behavior of the mensosa fly, a number of menose flies were bred separately on each cultior for two generations, then the complete insects obtained from each cultiot were used to test the anthyroidism on the same cultiot. The experiment was carried out in the form of a completely randomized design of B12 repetition, in temperature conditions of 27 ± 2°2°, relative humidity of 60 ± 5%, light period of 16 hours of light and 8 hours darkness. Plants were kept in the same physical and environmental conditions until the six-leggie stage on greenhouse squats.  After this stage, the netting was poured on each of the pots with a very fine mesh. In order to increase the feeding potential and laying of minus flies according to The Parkman method and colleagues, adult flies with a maximum of 12 hours of age difference were used. A pair of male and female flies reared on the same cultivar were released into each of the mentioned chambers and on the bushes by spirator. Twenty-four hours after release, adult flies were removed from the netting chamber with the help of a spirator. During the following days, variables such as fetal period, larvae duration, percentage of larvae mortality, duration of lewdness, pupae weight, percentage of femoral mortality and sexual ratio of adults were recorded. Sampling was standardized in terms of the position of leaves on the plant and the surfaces of the leaves that were provided to the insect. In order to make the studies easier and more accurate to evaluate the variables, in order to measure the length of larval and lewd periods, according to silak and yuldase method, leaves were separated from the plant and the end of petiole was imbued with water. The container containing leaves was placed in an incubator with temperatures of 27 ± 2 °C, relative humidity of 60 ± 5% and light period of 16 hours of light and 8 hours darkness. The leaves were examined daily and the obtained data were recorded. Only one larvae were allowed to grow on a sheet and additional larvae were removed in order to prevent intra-species competition and reduce survival and development. To measure the weight of the pupae, the nemama of the shafiras formed in a grating chamber (each repetition of each cultitor) with the scale of AND model with the accuracy of 0.001 g of the weighing chamber and the average weight of one pupae in each was calculated and recorded. The pupae obtained from each chamber was kept in vials with a lace cap. Thus, the percentage of mortality and sexual ratio of adults were investigated and recorded. For sex ratio test, the number of male and female insects on each cultivar was counted in five replications. Then, the data of different repetitions were gathered together and analyzed against the zero hypothesis (sex ratio 1:1) by chi square test.

The recorded data were analyzed using MSTAT software after applying the necessary conversions to normalize the data. If there was a significant difference, the treatments were compared at 5% probability level using dunken test. Data on larvae mortality and lewdness with arcsin√ (x/100) were normalized. Class analysis was used to classify the anticie resistance of the tested cultivars. For this purpose, all traits including fetal period, larvae duration, larvae mortality percentage, pupae weight, lewd duration, percentage of femoral mortality and sex ratio were used. The tested cultivars were classified by hierarchical method and entered method. In this method, euclidean distance square was used to measure the distances. This analysis was performed by SPSS software.

Analysis of variance of the data from the experiments showed that the cultivars of the studied greenhouse grades in terms of larval duration, percentage of larval mortality and pupae weight of minnow fly at the probability level of 5% mixing There was no significant difference between each other in terms of fetal duration, duration of lewdness, percentage of mortality and sex ratio (Table 1). This indicates that fetal and lef durations are probably not affected by plant hosts. The results obtained on bean cultivars confirm this (Zahiri and his colleagues). The meaning of pupae weight may be caused by the effect of cultivariant on pupae weight through the effect on the larvae stage. The environment in which pupae occurs affects the successful growth and development of pupae and its conversion into a complete insect. In this study, pupae weight in radiant cultigraph was 18.1 times higher than Janet cultior, which was probably due to more insect feeding in larval stage of leaf tissue.

Ns and *: There is no significant difference at the 5% level, respectively.

The results showed that competition within the species of minus larvae in laboratory or field conditions may reduce the survival, size of larvae, pupae and consequently the size of adult insects. Therefore, in this study, only one larvae on the leaves were allowed to grow to calculate the length of the larvae period. Extra-species competition with aphids and aphids may prevent liriomyza population from increasing by affecting the growth and development of larvae. In this study, it was found that at constant temperature and absence of competing insects, the length of larvae period and percentage of larvae mortality are affected by the leaf anisologic factor of plant hosts and greenhouse street cultivars have a significant effect on these indices. Tromble and colleagues' studies for non-selection test showed that resistant cultivars, in addition to a lower number of holes in nutrition, provided less possibility for the growth and development of L. trifolii larvae.

The averages with the same letters in each column do not have a significant 5% probability level.

Regarding the sex ratio, the assumption of zero in x2 test was accepted based on the lack of significant difference between the number of males and females in different cultivars. This means that the sex ratio of minnow flies was not significantly different in different cultivars (Table 3). Parla studies showed that the genus ratio of Liriomyza species was 1:1 and L. tirfolii-focused laboratory breeding showed almost a sex ratio of 1:1 for emerging adults.

The results of the tests did not show a relatively high level of resistance to minnow flies in Storm, Janet and Afzal cultivars, so probably the use of these cultivars in polluted greenhouses will not lead to the selection of break resistance populations. However, the observed resistance levels in greenhouse fantasy cultivars promising the use of resistant cultivars in the integrated management of this pest and reducing the environmental and human adverse effects caused by repeated sprayers It's going to be on this scourge.