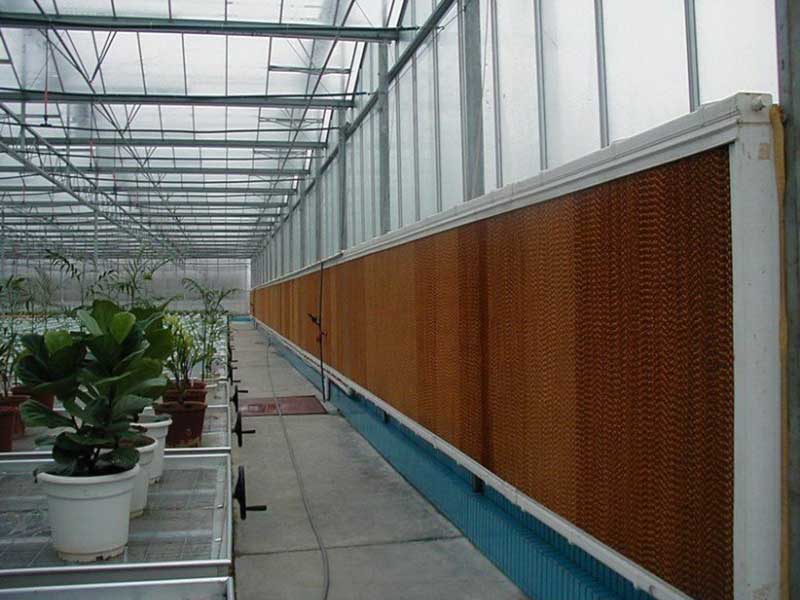 In this article, we will try to introduce the equipment used and useful in the greenhouse in 12 parts and review the important points in their preparation and use. In this section, we will introduce cooling and cooling system.

Most places except those in the highlands go through a heat period throughout the year, which is often harmful to plants inside the greenhouse. The effects of high temperatures cause the stem strength to disappear and the flowers shrink and in some cases cause bud death. To cool greenhouses, the following methods are used:

In some cases, the external surface of greenhouses when heat begins in spring is sprayed with a thin layer of lime juice or mud water or painted with a white color soluble in cold water, this causes a large amount of sun rays to be reflected and prevents overheating of the air inside the greenhouse.

In other greenhouses, glass and light parts are covered with mats or colored nets or canopies. This act absorbs radiant light and prevents them from entering directly under the canopy. This is also said to be a shadow.

Use of a proliferation system:

The most common method of cooling system is fan evaporation, how to set it up in such a way that along one of the greenhouse walls, a nationwide cover plate is standing and water is flown on it by perforated pipes located in the wings of the system to be wet, sometimes using cloud mattresses or commercial wood instead of cooler covers. be. Then they put one or more fans (fans) in front of it. When the air fan is turned on outside the mattress or wet cover, the water is evaporated in large quantities and because it is a heat-absorbing process, so the air entering the hall cools and as a result, the space inside the greenhouse is cooled.

Hooded and fan system is one of the cheapest ways to cool. In the path of this system, thermostat is usually installed to automatically control the temperature.

Use of water or gas coolers: