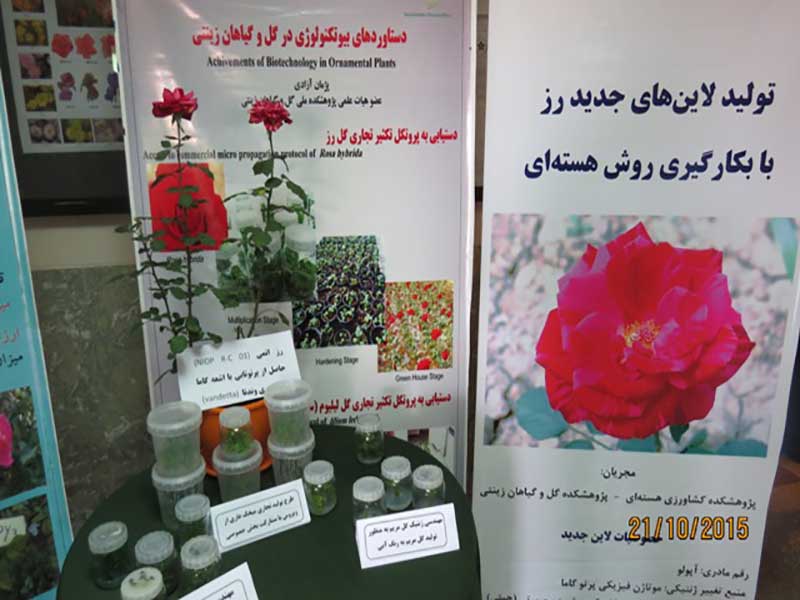 The chrysanthemum festival was held in an area of 3000 square meters, in which more than 600 modified chrysanthemums of this research institute in different colors, sizes and shapes were exposed to the public.

The 14th National Festival of Chrysanthemums was held from October 20 to November 31 at the National Research Institute of Flowers and Ornamental Plants. The festival was held in an area of 3000 square meters in which more than 600 modified chrysanthemums of this research institute in different colors, sizes and shapes were exposed to the public.

Presentation of research achievements, introduction of genetic resources, commercialization policy of production technology, possibility of ordering organizations and producers of new cultivars of chrysanthemums were the goals of the festival in the neighborhoods.

The opening of the 14th chrysanthemum exhibition on October 20, 1994 in the assembly hall of the Flower and Ornamental Plants Research Institute with the presence of Dr. Iskander Zand, Deputy Minister and Head of the Agricultural Education and Extension Research Organization, Hojjatoleslam and Muslimeen Salimi, Member of the Islamic Consultative Assembly, Dr. Abdolreza Bagheri Ghaem The official of the research organization, Mr. Sajjadi, the governor of Mahallat city, Mr. Farsijani, the deputy of plant production of Markazi Jihad Agricultural Organization and Dr. Abbasifar, the deputy of financial administration and support of Arako University were the managers of executive bodies and representatives of private sector and media. Also in this ceremony, technology-based research contracts were signed with the private sector to obtain technical knowledge of new rose bases and new hornbeam cultivars.

Dr. Azadi, Director of the Flower and Ornamental Plants Research Institute, while pointing to the appropriate infrastructure in the Flower and Ornamental Plants Research Institute, while explaining the model of this research institute in producing technical knowledge with the participation of the private sector, plans to activate the research stations in Tehran, Alborz and Gilan provinces. , Considered Mazandaran and Khuzestan, which are the centers of flower production in the country, important. Explaining the resistance economy plans of this research institute, reducing the import and entering the export markets as the prominent features of these plans and noting that by implementing these plans, the country's products will be successful in competing in global markets.

Then, Dr. Eskandar Zand, Deputy Minister and Head of the Agricultural Education and Extension Research Organization, in his speech, appreciated the efforts of the research institute staff to hold an exhibition of improved cultivars of chrysanthemums, roses and lilies, and considered gardening as one of the country's advantages. He also expressed satisfaction with the model of cooperation between the research institute and the private sector. Noting that we are in a period of transition, he pointed to the research projects in the Agricultural Research Organization, which with the planning done, the research organization's approach has shifted from government research to private sector research.The head of the research organization, while noting that we expect knowledge-based companies to be pursued more seriously, said that the Flower and Ornamental Plants Research Center will establish a flower and ornamental plants growth center and start its work by next year. He added that our second step after research with the participation of the private sector is the development of knowledge-based companies in the field of horticultural sciences.

Then, Engineer Sajjadi, the governor of Mahallat city, and Hojjatoleslam and Muslimeen Salimi, the representative of the city in the Islamic Consultative Assembly, thanked the organizers of the exhibition and asked the government to support the applied research of this research institute. Ebrahimi, the head of the Flower and Plant Union of Mahallat city, while appreciating the constructive interaction of the research institute with the private sector, called for the serious support of the Ministry of Jihad for this research institute in order to provide the required equipment and raise the development problems of this industry.In the continuation of this ceremony, with the presence of the directors of the Agricultural Education and Extension Research Organization, technology-based research contracts were concluded with the participation of the private sector to obtain technical knowledge for propagating rose bases and new hornbeam cultivars between the research institute and two private companies. At the end, the participants visited the exhibition of chrysanthemums.